The training is what I describe as a miracle! 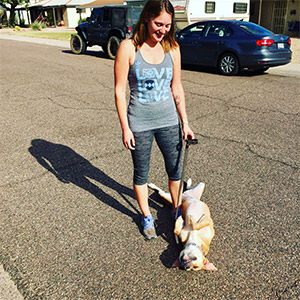 I adopted Kady a little over a year ago, I was aware that she had bit a cyclist, possessed other aggressive tendencies, was destructive and had terrible separation anxiety. I thought that if I gave her enough love she would turn around over time. I was extremely mistaken and a year later very little had improved and in some cases things had worsened. Taking her out on walks became increasingly difficult because she would bark, growl and lunge at nearly everything. I was overwhelmed by stress on a daily basis and there was no end in sight.

In an attempt to desensitize Kady from her aggressive tendencies towards humans; I took her to Home Depot. Luckily, we had a chance encounter with K and RJ from Zenergy dog training. The muzzle on her snout and her reactivity towards their dog was what prompted our first discussion. During our brief conversation, they began to share stories of other dogs exactly like her that they had been able to rehabilitate. I decided to sign her up for their boot camp.

Once she had completed the boot camp, we went to a nearby shopping center to have her go home lesson. I was shocked at the incredible transformation that had occurred. She wasn’t pulling or lunging and walked calmly next to me the entire time. People and other dogs rarely even received a glance from her. When a toddler began to climb on her I was left speechless because she didn’t seem to mind it at all. We then sat in the grass, where a family approached us, Kady rolled over to absorb all the belly rubs that she possibly could.

Almost a month later, she remains calm and hasn’t regressed. The transformation that took place during the training is what I describe as a miracle. Kady was placed into difficult situations where she was challenged to confront her fears and have a different conversation with them yielding positive results. Now I can leave my home with or without her stress free and in confidence that she will be a perfectly behaved dog. #zen